A Family Builds a Hut 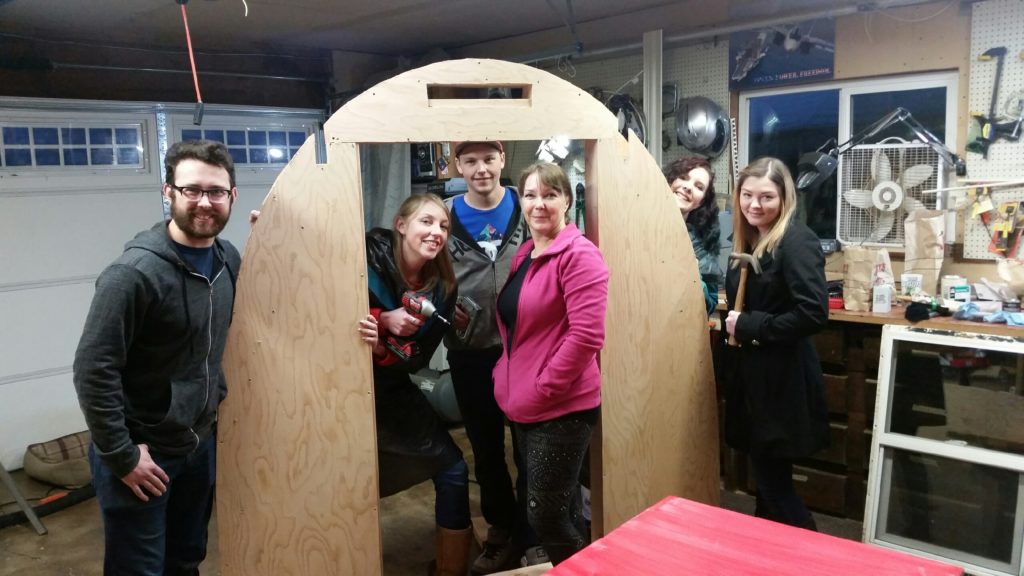 A new Conestoga Hut was recently built and placed at the Seventh-day Adventist Church in Springfield to provide temporary shelter for a person without a home. But the way the Hut was built and paid for is unique in the history of Hut building in Lane County.

The idea for building the Hut came from Marcola resident Marie Wilson. Marie received her yearly holiday bonus in November last year from her employer, InfoGroup Northwest, and wanted to use the $900 she received to help lift someone out of being homeless.

A few months later, with husband Don as the builder-in-chief and the help of several of their young-adult kids, a new Conestoga Hut was constructed at the Seventh-day Adventist Church in Springfield. A new resident is now living there—in a sturdy and durable shelter—someone who had been living in her van for an extended period. 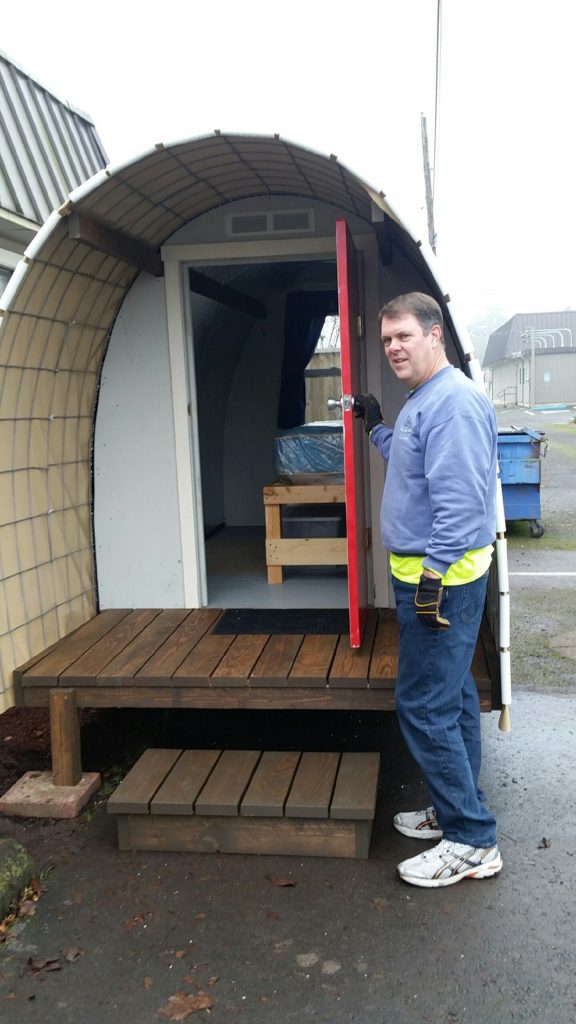 “Our family believes in the idea of pay-it-forward,” Marie says. “We try to live our lives that way, and so do the kids, in their own ways.”

When Marie told her boss of her plan, InfoGroup Northwest decided to match her gift with a donation to CSS.

Marie learned of CSS and the Huts at a meeting of the Lane County Poverty and Homeless Board last year. She went home and did some internet research about CSS, including watching a few YouTube videos, and, with her husband’s input, decided they were going to build a Hut.

So, how does one go about building a Hut from scratch? First thing Marie and Don did was purchase the CSS manual, How to Build a Conestoga Hut ($39.95, through the CSS website).

“We thought that’s how everybody does it,” Marie said. Turns out Marie and Don are the first local volunteers to purchase the manual and use it to build and assemble a Hut.

“We were pretty amazed at how detailed the instructions were,” says Don. “It was all there, pictures, dimensions of each plywood section, size of screws, you name it—with a few small things we needed to tweak.”

Marie and Don spent six weeks or so in their “spare time” shopping for materials, and building and assembling the Hut sections at their home. The floor sections were constructed on site at the Seventh-day Adventist Church with a crew of family members and friends on a Saturday in early January. The next day, Don and family and a few volunteers, erected the walls and roof and added insulation. Don’s mother, Phyllis, sewed curtains for the window, and they are now in place.

Seventh-day Adventist Pastor Lutz Binus is very happy the church could offer the site for the Hut to provide temporary housing.

“Our church also participates in the Egan Warming Center program, and a few other service programs to help those in need,” Pastor Binus said. “It is part of what the Seventh-day Adventist Church does in other parts of the country.”

“We are glad to offer this space for a temporary shelter, and it is working out very well so far,” he said.

Marie and Don attended a service at the church recently and talked with the congregation about why and how they decided to build the Hut. They also offered their thanks to the congregation and Pastor Binus for providing the site.

The first resident of the new hut moved in recently. She had been on a waiting list for temporary housing through St. Vincent de Paul, the agency that places many residents in Huts at churches around Eugene and Springfield.

The Hut build project was a fun and creative challenge for Marie and Don. They each said there were a few things they might change if they were to do it again. But, “all in all it was a great experience for our family,” says Marie.

Paying it forward, as the saying goes, always seem to work out that way.