Autobahn ImportsSharing is Part of Thier Business

Autobahn Imports has been in business servicing customers in Eugene/Springfield since 1974. It also has the distinction of being the only car repair shop in Lane County to host a Conestoga Hut—actually a pair of them—on its property.

“It just seems the right thing to do,” says the owner of Autobahn, Sree Thakkun. “We have the vacant land, so if I can be of service helping others in this way, so be it.” 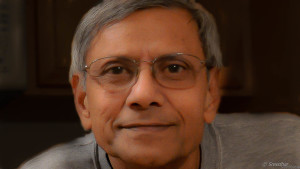 “Hut Crew” to the backside of Autobahn’s property on River Rd. A second Hut was recently built on the site.

Sree said the decision to allow placement of theHuts has a practical side as well. It will help as a deterrent to possible vandalism or theft on the property after business hours. In addition, the two Hut residents will be responsible for 10 hours of work per month at the site doing chores such as trash pickup, cleaning the bathroom, and cutting the grass.

The idea to host a CSS Hut site came from a conversation Sree had with Pastor Dan Bryant of First Christian Church. He and Dan have known one another many years as neighbors and friends. Dan knew CSS was looking for sites in neighborhoods where Huts could be placed, so asked if Sree would be interested.

Sree has led a life of adventure since the early days of his youth, including time being homeless. He was born in India and traveled extensively in his native country, at one point joining the Freedom Fighters of India in the quest to help improve the lives of oppressed people. He also traveled to the northern holy city of Rishikesh where he met the renowned teacher Swami Satchidananda who provided practical and spiritual guidance.

Sree emigrated to the U.S. in the early 1970s, spent time at an ashram in Pennsylvania, lived at a commune in Michigan, and eventually came to live in Oregon. His took a job in Salem at a car repair shop—after persistently bugging the owner to hire him, and at first for no pay—then moved to Eugene where he opened the Bug Barn, which later became Autobahn Imports.

Sree has also been an active volunteer and longtime soccer coach with Kidsports.

“I have been a bit of a rebel since the time I was born,” he said. “Water flows where it needs to” is his philosophy.

“We’re very excited about providing Huts at Autobahn Imports,” says Erik de Buhr of CSS. “It’s not every day you meet a business owner who is as supportive to our cause as Sree is, and that’s refreshing.

“It’s the human thing to do. It gives someone who is struggling with fitting into mainstream society a place to have stability. By giving them a place we prevent them from possibly becoming a burden on others.”