The Conestoga Huts that have become an important part of temporary micro-housing for folks in Eugene are simple structures by design. But simple doesn’t mean cheaply built. And that especially goes for the single window installed at the back of each Hut. 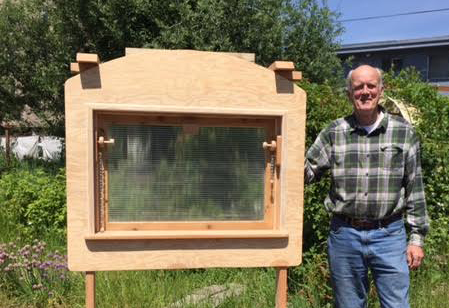 Each window is handcrafted from cedar boards in the small wood shop of Fred Wesley. Fred puts in about five to six hours of volunteer time on each window, cutting boards to length, planing and sanding them, installing dowels at the joints, and gluing and clamping everything in place. It’s a lot of work and makes for a lot of sawdust, but Fred is happy to be part of a group of volunteers who help folks to live in temporary shelters.

“I just like to help out when I can,” Fred says. “And if I have the skills necessary to do a job, all the better. I like what CSS is all about, and I really like that people who don’t have a home can live in a temporary Hut for a while.”

“And every home needs a window, right?” he says.

The windows have hinges and open outward, held in place by lengths of small chain and a wooden fastener that Fred also makes.

Fred has been a woodworker most of his life. He and his wife Phemie built a cabin they lived in near the southern Oregon town of Broadbent in the 1970s. They salvaged most of the materials for the cabin from various sources in the area. Fred also worked as an odd-job carpenter for several years there, and Phemie was a potter.

Fred eventually took a job with the post office in Myrtle Point, and later transferred to Eugene. He delivered mail for the remainder of his post office career, mostly on a route in south Eugene, and is now retired.

Fred is also a longtime musician. He plays sax and standup bass and has been part of several bands over the years, playing most recently at The Jazz Station. He was a key volunteer at The Jazz Station when their leased building on West Broadway was refurbished to create the performance space.

Fred took over the Conestoga Hut window-making operation from Henry Schmald, a former volunteer with CSS who built over 30 windows. Henry was quite meticulous in designing and building the windows. He passed the design onto Fred in a notebook, including photos and drawings, which show precise measurements of each window part.

“It’s been really helpful to have this notebook with plans for the window,” Fred says. The notebook is quite detailed, including a cartoon of a guy sitting down to have a beer while the glue is drying for the window joints.

Fred makes two windows at a time. He says making them in pairs is more efficient.

Erik de Buhr, program director of CSS, says, “Having volunteers make custom windows gives the Huts a special touch. It helps the people coming into our shelters know there is more than just people’s donations behind the program…there is love.

“There is a group of great volunteers who give their time to give people in less fortunate circumstances a unique opportunity to do something different with their lives.”