The First United Methodist Church (FUMC) congregation has been a stellar supporter for Community Supported Shelters this past year. Members of the FUMC congregation actively seek out opportunities in the community to serve those in need, and CSS is one of the organizations that they have chosen to support.

Thanks to a cadre of volunteers from FUMC, there’s a new, enclosed food pantry at CSS headquarters on Grant Street. 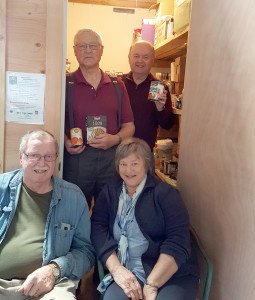 Clockwise from top left: Duane, Lee, Kathi, and Blake from FUMC in front of the pantry they built for CSS

“Having dedicated groups of volunteers like the folks at First United Methodist Church means everything,” says Fay de Buhr, co-executive director of CSS. “It’s what makes the work of Community Supported Shelters possible.”

First United Methodist Church also hosted the Annual CSS Benefit dinner in March, which was a huge success due to the enthusiastic participation of FUMC members.

Kathi Hoffer, Blake English, and Lee Sutton helped to plan the event. Blake was the head cook for the dinner, a role that suits him well as he has much experience in the world of Texas barbecue. The annual dinner included about 160 pounds of barbecue, six gallons of beans, and all the other fixings.

Kathi and the First United Women’s Group helped facilitate the dessert dash, which brought in $3200 to help build a new kitchen at the Roosevelt Safe Spot. Kathi and Blake also donated a stay at the Adobe Resort at the coast and a Texas BBQ for 20 people for our raffle drawing. Many others in the congregation helped set up and clean up, and many brought desserts. JoAnn English was the “behind the scenes” angel supporting the cook and keeping the BBQ buffet well stocked throughout the dinner. Rosalie Hulbert headed a team of volunteers that spent endless hours in the kitchen putting away dishes after the event.

The church waived the venue fees for the event and provided all the dinnerware, tables, and chairs and equipment, which helped make the event run so smoothly.

In addition to the food pantry and the fundraising dinner, Lee and several other church members have been making and serving lunch to the Expressway Safe Spot camp residents following their monthly work parties.

The United Methodist Women of FUMC raised $1,000 to donate to CSS, and the FUMC ‘Sock it to Mission’ campaign and Justice and Mission Matters (JAMM) fundraisers raised $2,600 for CSS as well.

“Everyone at First United Methodist Church has been very gracious, generous, thoughtful, thorough, and kind,” says Fay. “Words can’t truly describe how grateful and blessed we feel to have the support of these folks. It’s been a divine journey.”