CSS is a newly formed organization, but we have been involved for four years in developing and cooperating with others to build micro-housing for individuals seeking a downsized lifestyle. (Click Here to See the Icosa Hut). We were very focused on using as much reused materials for our shelters. Over time, we saw the need to also build for efficiency, simplicity, and movability if we were going to build a structure that would serve as a form of relief housing. 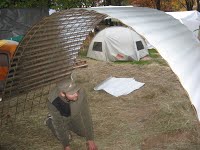 We began developing the Conestoga Hut during the Occupy movement in Eugene. Some people from the encampment between 6th and 7th avenues were concerned about a single mom and her child there who were struggling to get warm and dry. They asked us if we could build anything to help them. It took about a day to construct and set up a Hut for her, using materials we had stored at our shop. It was a very basic structure that doesn’t resemble what the Conestoga Hut is today, but the concept is basically the same.

Taking what we learned from the first Hut we built the second prototype behind our shop. This one resembled much more what the Conestoga Hut has become. We implemented a built-in floor platform, an overhang as a small porch area, a small door, and some other new features. Our family of three tested it out by sleeping in it for nearly six months during winter and spring of 2012. 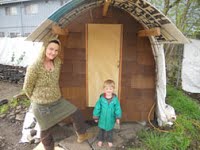 The third prototype was a collaboration between Opportunity Village Eugene and CSS, which we put on wheels to reveal to the Eugene City Council in late 2012. That really helped move things forward for the Huts. Working with OVE, we have placed eight Huts at three Eugene churches, and one Hut at a non-profit site. We are also placing another two Huts at a Church off Coburg Road in early June. 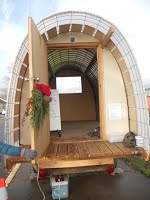 So far so good. It seems like the Huts are giving a few people a bit more stability in their lives, which has been our hope. The most difficult part has been finding sites to place them in the community. It is our experience that churches are the best kind of site to host the Huts because of the community that is inherently on-site. People do better with a shelter plus community, rather than just a shelter and no community influence. We think as church congregations see other churches having success with the project it could inspire them to give it a try. CSS is preparing to make presentations at interested churches about what we’ve learned from recent projects to help us successfully serve those in need. If you know of any potential church sites, please encourage church leaders to contact us.

Lastly, the Conestoga Huts are community-supported shelters! This is true from how they developed to how they are still developing. After CSS got great coverage from the local media, several commercial contractors and individuals have contacted us and offered to help bring the quality up another notch, so we are more prepared for next winter. In the next issue of our email newsletter we hope to show you the upgrades that are in the works.