CSS volunteers are people of action

John Winquist was driving on W. 11th near Beltline earlier this year when he spotted a small abandoned metal building in a nearby field.

“There wasn’t anything going on around it,” John says. “Just a sign with a phone number.”

John got out of his car, looked around at the metal structure, and wrote down the phone number. Three months later, the 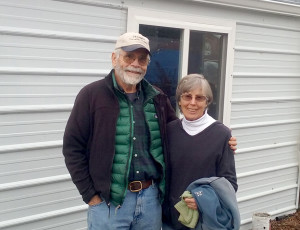 Roosevelt Safe Spot has a sturdy metal building that serves as the community meeting room sitting near the middle of the camp.

Just a little imagination, some ingenuity, a bit of persistence, and a desire to be of service was all it took.

John and his partner Pem do volunteer work for Community Supported Shelters, in particular at the Roosevelt Safe Spot where they do odd jobs to help make the camp a more comfortable and efficient place for residents. Their commitment to help with infrastructure improvements at the Roosevelt camp led to construction of the community room.

“We couldn’t be happier,” says Safe Spot Coordinator and resident Donna Jackson. “This metal shelter has really made a huge difference for all of us at this camp.”

The new meeting room serves as a place to get out of the elements for a while and to gather for meals and meetings. Yet none of this would have happened without the foresight and handiwork of John and Pem. Not to mention their persistence.

John and Pem drove to Harrisburg to pick up the metal walls and attachment pieces. CSS hired a crew of workers from Portland to come down and construct the building.

John has since added two sliding windows—ones he found at a window company in Junction City, which gave him a good discount. He also built a lean-to shed on the back side of the shelter that serves as storage for firewood.

The new community room has allowed residents to gather for community meals four or five times a week. Before the room was built, Donna says, the camp had at most one meal a month together. It’s also a gathering place for weekly planning meetings where decisions are made about Safe Spot events and where problems of daily living can be worked out.

“It has no doubt brought our community closer together,” Donna says. “We really look after each other here, and can have longer conversations about whatever is going on in people’s lives. There’s not as much of people being isolated as there maybe was before.”

“I really like what Community Supported Shelters is doing to provide a little stability in people’s lives,” John says.

John and Pem continue to volunteer for CSS. Their primary focus recently is cutting and hauling firewood for the Safe Spots, and they have brought four cords to the camps so far.

John will continue to keep his eyes open for opportunities to help make a difference in people’s lives at Community Supported Shelters.