Press enter to begin your search

“This is a place of solitude and transition.” 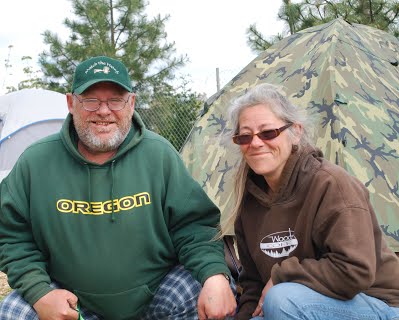 Bryan Bruder, 50, lives with his wife Jennifer, 51, in a tent at the rest stop for veterans at Northwest Expressway and Chambers Street. They had been in the camp for about two weeks when this interview took place.

It’s been over a year since we had a home. My mother-in-law decided to move

in with her other daughter so that left us at loose ends, down in Myrtle Creek, so we decided to come up to Eugene. We had established grounds here before so it was a safe haven for us to come back and replant.
Before moving to the camp, we were living in our van as well as a Conestoga Hut at the parking lot of the Westside Apostolic Church at 12th and Grant.

I am veteran, served in the Air Force, from 1981 to 1983. And I was a fire fighter. We went to Montana fighting fires, down to Klamath Falls, to California a few times, was on the Biscuit Fire, the biggest fire in Oregon history, in Lowell, Oakridge, Burns, Eastern Oregon. I was on the crew of the eight fire fighters who died [in 2003]. I had just got off the crew and my replacement died, so I got out of the fire fighting scene because of that. We had to bury eight brothers at one time, that was too much for me to deal with, so I quit fire fighting.

This camp reminds me of fire camp. It’s organized. It’s clean. The majority of us are veterans in here so we have a common bond amongst each other and the majority of us in here have PTSD. And we won’t tolerate a Whoville kind of scene. We were never involved in it. We don’t want that kind of reputation. We don’t want squatters.
We have 13 people now and we’re bringing in another five sites so we’re expanding. It’s not an open camp. We vote people in. There’s an application, a background check, and an interview with Erik [de Buhr, executive director of CSS], and then we vote.

The camp got started by Ricardo, the camp manager. He was at Whoville and helped get it built, and then they started pushing out veterans, so he took it upon himself and got connected with Erik and created the campsite for veterans. God bless him for it.

Veterans need a place of our own because we are our own. We have the common bond because of what we’ve done. We have a brotherhood that is special and can’t be broken and the best therapy for a veteran is another veteran whether their story is the same or close to the same or not even related. We still have the understanding to sit there with compassion and listen, and offer advice or just a good word. The general public has no idea what we go we through for our nation, the abuses that we take on, the cramming of education that we have to endure.

I see a therapist on a regular basis. I take medication and that’s another thing that people need to realize about veterans is that sometimes their medication will make them work in a manner that is not recognizable to the untrained. And people don’t realize that all it takes is just a wrong word and it sparks all kinds of havoc for a veteran. We’ve got a campmate here who started talking about 9/11, how he thought it was an inside job, it was all government-run and sponsored. And me and a couple other vets got agitated and it sparked our PTSD because we know what the government is capable of because of our training. It was an offensive conversation, so we had to shut it down fast.

I’d like a special notation to go out to the public that if you see a vet, thank a vet. We all put ourselves at risk for our nation and we should be thanked for our service.

This is a place of solitude and transition not aggression. We have common sense rules, but there’s not many. It’s basically no substance abuse, no alcohol abuse. It’s not tolerated. We don’t allow it here. Be respectful to other campers. There are safety minded guidelines. We’re supposed to do a shift of gatekeeping to keep the general public from coming in and getting our things, our belongings. We’re supposed to leave the camp from 9 to 4.

This is a foundation so that we can spread our wings. Right now, I’m trying to get a chapter 31 grant through the VA, which covers college costs. I have the power to bring back to life a nonprofit organization dedicated to helping low income and disadvantaged veterans. I’m trying to get schooling so I can go to the UO and get the nonprofit business management program under my belt so that I can lift that organization off the ground and help other veterans like myself, try to meet needs such as housing, eye glasses, a warming center dedicated for them from November to March, a safe warm place to be at night, and also a community center where they can come in and grab a bite to eat, sit down at a computer, get on a phone, or play a game of backgammon or cribbage or whatever their deal is, to give them a safe haven.

We’re not just sitting here squatting. Some are waiting for their HUD-backed vouchers [for housing] and others are seeking employment. We all have our different things that we’re doing to get ourselves out of the situations we’re in—and that’s our goal.

We are active with the Hope Center at the Westside Apostolic Church, a veterans service program that welcomes all veterans every Friday from 10 to 12. Lots of organizations are involved, like the VA, St. Vinny’s, Sponsors, Oregon Health Plan, and Vet Lift.

Whoville was a bad scene and it created a bad reputation, and that’s why a lot of people are against the camp sites. We get hecklers coming by here, yelling, “Get a job” and things like that. They don’t realize exactly what we are trying to do. We’re not looking for a handout, we’re looking for a helping hand up. That’s important that the public know that. We would like the public to welcome us, not hamper us.

Living in the Conestoga Hut was very comfortable but it was temporary. This is a very comforting setting. There’s a comradery here, so it’s easy to relax at a camp like this.