Filling A Gap with A “Godsend” 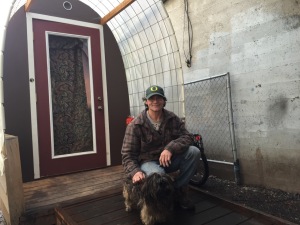 Aaron Smith did not want to go back out on the streets. Recovering from an infected collarbone and being weaned from an eight-year addiction to heroin, he was nearing the end of the 30-day limit of his stay at ShelterCare’s Homeless Medical Respite Program.

“I had nowhere to go,” Smith says.

But ShelterCare community health worker Sydney DeBell had worked with Community Supported Shelters in helping a couple go from a Conestoga Hut in a CSS Rest Stop into the respite program and then back into the Hut—which had been moved to the First Christian Church—before finally placing them into housing managed by ShelterCare. DeBell thought that Hut might work for Smith. After meeting with Erik de Buhr, CSS executive director, and signing a behavior agreement with the First Christian Church, Smith moved to the Hut in early December.

“This is a Godsend,” says Smith, who was living in the brush not far from Franklin Boulevard before his hospital stay. “It’s dry. I can lock my stuff up. It’s just a safe place for me and my dog to lay down at night.”

The kind of collaboration that kept Smith—and his dog Pup-pup—off the streets can play a key role in addressing homelessness, says Dan Bryant, pastor of the First Christian Church. Different groups can bring different capabilities to address the problem, he says, and “If everyone takes a little piece of it, we can create solutions that work.”

ShelterCare has a long history of working with other organizations to create coordinated strategies to meet the needs of homeless clients, says Lucy Vinis, development director. She welcomes Community Supported Shelters as a relatively new partner. “The Huts are a pretty spectacular short-term solution to fill in the gap between one step and the next,” she says.

Smith went to the emergency room with his infected collarbone and ended up at Sacred Heart Medical Center at Riverbend for about two weeks. The hospital treated his wound and began to wean him from heroin with methadone treatment. Social workers there determined that he was eligible for the ShelterCare respite program—a partnership with PeaceHealth and Trillium Community Health Plan, which coordinate Oregon Health Plan coverage in Lane County. OHP covers the cost of the respite treatment.

De Buhr says he first contacted Trillium about the couple in the Rest Stop Hut, who had repeated visits to hospital emergency rooms, and the Trillium caseworker agreed that the ShelterCare respite program was a more efficient way to treat them. The collaboration has grown from there.

During Smith’s stay at the respite program, the staff coordinated his medical treatment—changing his bandage every other day, administering his medication, and facilitating regular visits to his primary care physician. He was tapered off the methadone and now takes only non-narcotic sleep aids.

The goal of the respite program, according to Vinis, is to move clients directly to longer-term housing after the program’s 30-day limit is reached. ShelterCare offers about twelve one-to-two bedroom subsidized apartments through its new Cascade program, but the respite program has grown so fast—initially intended to serve four clients at a time, it now has fifteen—that it is not always possible to accommodate all respite clients. That’s the gap that Aaron Smith found himself in.

That’s where a Hut can serve a valuable role as an intermediary step, Vinis says. Moving respite clients like Smith into a Hut instead of releasing them to go back to the streets allows the ShelterCare case worker to keep working with them, to make sure that their medical or mental health problems continue to be addressed. And it helps the clients meet the challenges of whatever sort of recovery they are dealing with.

“We all know that it’s a lot easier to organize your thoughts and do the things you need to do when you have one safe place to be,” Vinis says.

In addition to coordinating Smith’s medical care, ShelterCare is helping him to secure identification papers, a critical step in applying for Supplemental Security Income and maybe even getting back to work in the painting and construction field, which is what he did before “lots of bad choices” landed him on the streets. He also gets a bus pass from ShelterCare and someone to talk to. “[Community Health Worker] Jeanette [Saint-Onge] pretty much took me under her wing, and she’s been a great help.” The plan is for Smith to stay in the Hut, which is now designated for ShelterCare clients, for one to two months before moving to more permanent housing.

For CSS’s de Buhr and Dan Bryant of the First Christian Church, ShelterCare’s involvement fills a gap in their skill set for dealing with homeless clients facing challenging medical or mental issues. “We’re not social workers,” de Buhr says. “We’re focused on providing basic shelter, and many of these people need somebody to be their advocate. ShelterCare can do that. First Christian Church can provide the space for the Hut. So it’s everybody doing what they do best in the community.”

Bryant, who also serves as vice-chair of Lane County’s Poverty and Homelessness Board, hopes this kind of collaboration will encourage “more folks to host Huts.” He’s actively campaigning around the county toward that end.

“We know we can do this,” he says. “There are lots of ways to make it work by getting more community partners involved, to help people who want to host Huts with things like client intake and management. Someone else can do those things.” St. Vincent de Paul’s overnight parking program, for example, provides client-screening services for some Hut hosting programs.

“The critical need,” Bryant says, “is more spaces to put these Huts.”

ShelterCare’s Vinis says she “absolutely” hopes to see more Huts become available to fill in the gaps for homeless clients. And de Buhr says CSS is ready to build as many Huts as there are places to put them. “It’s more difficult now finding sites for Huts,” he says, “than getting money to build Huts.”

CSS has other collaborations in the works. All the components of a Hut for White Bird Clinic are ready to go in the CSS shops, but a location has not been set. That Hut will host clients for very short-term (two or three days) emergencies. CSS also is in discussions with the Eugene Mission about providing several Huts for clean and sober veterans.

Aaron Smith says his Hut has helped to keep him clean and sober. “Before I didn’t give a shit. I had nothing to care for. What? A tent? Come on. This Hut and the help I’ve gotten from ShelterCare has given me a reason to care and a structure. I don’t want to lose this. I really don’t.”