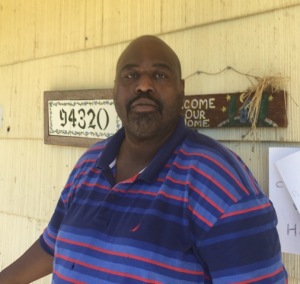 How do you get from living on the streets to having a place to call home? Anyone can tell you there are lots of different paths, but for some former residents of Community Supported Shelters’ Safe Spots, a few key elements made that transition possible: stable shelter, a sense of security, and a supportive community.

Robert Owens was sleeping on porches and under bridges before being accepted into the Vets Camp in March 2014 and that changed everything for him. “I didn’t have to worry about constantly trying to figure out where I was going to sleep that night and whether the cops were coming to roust me,” he says. Owens, who served in the army from 1988 to 1990, lived in that camp until December 2014 and now has his own room in a big house on the outskirts of Junction City.

“If you don’t have to worry about where you’re going to sleep that night you can pretty much take care of everything else,” he says. “When you’re homeless, when you get up in the morning, the first thing you think of is ‘gotta get something to eat,’ and after that, you’re already thinking about where you’re going to sleep. It’s hard to do anything else. And there are a lot of trust issues out there. Not all homeless are bad like some people think, but you’ve got to watch your stuff. “

When he moved into the Vets Camp, Owens, 44, who has osteoarthritis in his hip, was trying to get Social Security Disability Insurance but was stymied by the bureaucracy. He had been kicked out of the Eugene Mission for testing positive for marijuana use, which he says he was taking to alleviate his hip pain. Though smoking marijuana was not allowed in the Vets Camp, he could smoke away from the camp. And the camp gave him a stable and safe place to be while he worked his way through the bureaucratic maze of Social Security—and something more: other people with whom to have normal conversations.

“It gets lonely out there,” he says. “There’s a lot of solitude in being homeless. ’Normal’ people don’t want to talk to you. People will kind of act like you’re not there. It was valuable just having someone to talk to. We had a camp full of vets and we’ve all got something in common.”

When his disability payments finally came through, he stayed with his brother for a while before moving into his current place in February. He has an upstairs room with a window air conditioner. ”This is perfect,” he says. “It’s quiet, on the edge of town, there’s not a lot of traffic going by. There’s no drama here.“ He’s trying to lose weight and arrange to have bariatric surgery so he can get his hip fixed, and he is pursuing a passion for photography.

“It’s pretty empowering having my own place. I’ve come a long way from sleeping under the bridge. Every time I drive past that bridge I look at it and it makes me appreciate the things that I have.” 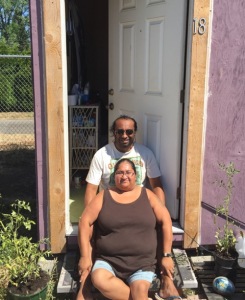 Nonnie and Carlos Vasquez lived in a tent at the Roosevelt Safe Spot from September 2014 until the middle of June when they moved into a “small home” at Opportunity Village Eugene (OVE), a few blocks away.

The Vasquezes had to leave their home in Maui in June 2014 because they could no longer afford that island’s high cost of living. Carlos was unable to work because of back and kidney problems and struggles with depression and anxiety. They came to Oregon to be closer to Nonnie’s four children, who live here. They tried Portland first, but a month of couch-surfing and unsuccessfully trying to access services for the homeless led them to spend their last $53 on bus tickets to Eugene. They found beds at the Mission but looked for an alternative because of dorm-like sleeping arrangements where they were not allowed to be together—the Mission has separate sleeping facilities for women and men (even for married couples). “We couldn’t even hold hands on the street,” Nonnie says.

Within two weeks of submitting an application for the Safe Spot, they were in.

“At The Safe Spot, we were able to be together at night time,” Nonnie says. “And we knew that during the day, our stuff wasn’t going to be gone through or taken because of a locked gate, and at night, we could sleep without having to worry about the cops because we’re not sleeping where we’re not supposed to be.”

Nonnie, 40, started working at the Salvation Army—a ten-minute walk from the Roosevelt camp and OVE—at the same time they moved into the Safe Spot. She is now a supervisor there and does “pretty much everything,” working as many as 25 hours a week, even though she’s only scheduled for 18—she goes in early and stays late to get as many hours as she can. Carlos, 45, has been working on getting disability insurance payments since they were in Portland, well over a year ago, but has faced many of the same bureaucratic obstacles as Owens did. He’s now hoping to get help with the paperwork—which he struggles with—from a Eugene attorney who offers assistance with social security problems at no charge.

Opportunity Village has 30 dwellings—including nine Conestoga Huts—accommodating close to 40 people. In the Vasquez’s 8-by-10 small home, living conditions are a step up from their situation in a tent at the Safe Spot. “It’s nice to be able to stand up,” Carlos says.

OVE has a kitchen facility with two refrigerators, laundry facilities, a common area in a yurt with computers and Wi-Fi, and a bathroom area with showers. Some residents have their own gardens with flourishing tomatoes and zucchini. Nonnie and Carlos have solar panels, which they first started using at the Safe Spot, to charge their cell phones and run a portable DVD player. And they’ve found a supportive community similar to what they experienced at the Safe Spot.

Like Owens, Carlos and Nonnie point to the camaraderie at the Safe Spot as a key element in their transition from homeless to small home residents. “That’s really hard to find these days in the homeless situation because out there everybody’s in it for themselves,” Nonnie says. “But in the Safe Spot and at OVE, everybody works together.”

“We made good friends [at the Safe Spot] and that’s important to us,” Carlos says. “We’re kind of weird. We don’t have a lot of friends. We’re very picky about who our friends are and we found people who are very humble and genuine—just good people. That just improved the quality of that safety feeling. We still have relations with people there. ”

The couple says that the reputation that the Safe Spots and OVE have earned in the community has helped to open doors for them.

“When it comes to references, we have Erik [de Buhr, executive director of Community Supported Shelters] and the people we live with now,” Carlos says. “And everybody knows Praise [site manager at the Roosevelt camp]. “People will say, ‘oh, you live with Praise, you must be okay.’”

“We needed references to move in here,” Carlos says. “It always helps to have local references. In the future when it comes to being able to rent a unit that is super important to have.”

“Both of these places are well known and spoken of well,” Nonnie says. “If you live down by the river, people will give you this look, like ‘what kind of person are you?’ But if you’ve come from the Safe Spot or OVE, they know you’ve had to work with others and live in a community.”

Carlos and Nonnie are saving their money with the hope of moving to a place where they can stay long term and “have kind of a normal life.” They feel like they are in a much better position to do that than they were when they arrived in Eugene with everything they owned on their backs.

“We know there are going to be challenges that are going to get in the way,” Nonnie says. “But we have our faith never ending, and He’s blessed us with so many things already, like being here.”