The first 15 months of a Hut hosting program at Wesley United Methodist Church have brought successes, failures, a lot of learning, and immeasurable rewards. 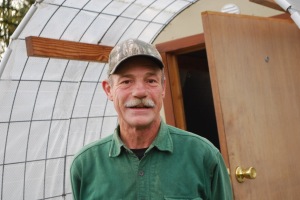 The rains from one of the fall’s first heavy storms pound on the roof of a Conestoga Hut behind Wesley United Methodist Church, but Mel Bradshaw sits comfortably inside, smiling and dry: “After fifteen years on the streets, this is just incredible,” he says.

Bradshaw is living in one of two Huts hosted by the church. The Huts were set up in July 2013, thanks to the efforts of a church group calling itself the Wesley Wagons. Since then, eight “guests” have lived in them. “This is a place where they can relax and feel safe, charge their batteries, and save some money,” says John Porter, chair of the Wesley Wagons committee, “so they have an opportunity to move into a better housing situation.”

Wesley guests are limited to six months in the Huts so they understand it is a transitional situation and that they should be preparing for their next step. “We tell them that there are still people out there on the streets who could use these Huts, so you’ve got to be working on these things—and we’ll try to help you.”

Of the first six residents who lived in the Huts and then left, Porter, who is retired after more than twenty years as Eugene’s planning director, counts three as successes—they managed to mostly abide by the rules and used their time to secure better housing arrangements. The two current residents—Bradshaw and James Oh—are nearing the end of their six-months stays and have good prospects for more long-term housing.

Among the failures were a young woman who couldn’t live without her boyfriend who was in trouble with the law, an alcoholic man who couldn’t control his drinking, and an older woman who broke every rule. But even these failures have been part of the growth process for Porter and the church.

“We’ve learned,” he says, “and we’re better able to take on that kind of issue because it’s not somebody else talking to us about it, it’s something we’ve gone through. Now, we try to strategically intervene on these issues, instead of just applying a direct hammer.”

“Even the guest we had the hardest time with, I like him,” Porter says. “I’m his friend and he knows I’m always going to be his friend.”

“We started wanting them just to follow the rules directly, but you’ve got to talk to these people and let them talk to you and you’ve got to let them know that they’re helping us as much as were are helping them.”

Porter says that one of the challenges is that their guests sometimes have learned “how to work the system,” developing sometimes manipulative coping skills necessary to survive on the street. While they may not lie directly, “they’re not being truthful,” he says. One man never mentioned in his application interview that he had serious health problems, that he needed insulin, refrigeration, and a breathing apparatus. While not happy with the guest’s initial lack of candor, the church group was able to accommodate him and he became one the success stories. They even helped him with a deposit he needed to move into the housing situation that followed his time in the Hut.

“We’re not perfect by any means, but we’re trying,” Porter says. “Every new person is a new situation.”

“What I really like about it is that after you get to know them and they have some trust in you, you get to see them as they really are, rather than as just being different from you.”

It’s that spirit of compassion that has made the Wesley Wagons program successful, according to Keith Heath, St. Vincent de Paul’s Service Station manger and overnight parking program coordinator—and advisor to Wesley group. “They meet with the residents once a week and make them feel loved and part of the church community,” Heath says. “And they always ask them, ‘What can we do to help?’”

“When we treat people with respect, we’re going to get positive results 99 percent of the time,” he says.

The Wesley group got started after a visit to the Episcopal Church of the Resurrection, where there was an active Hut hosting program. Wesley United has a long history with service and mission work. “We’re a Christian organization and if we don’t try to act out quite a bit of what Jesus said, we’re missing something,” Porter says.

They spent time explaining the program to people who lived nearby in their Willakenzie neighborhood. They did encounter some resistance. One neighbor with children insisted that a fence be put up so there wasn’t a view into his backyard from the Huts. And other people were “awfully nice about it,” Porter says. “You don’t want to create a situation with your congregation or your neighborhood where you’re going to have antagonism going on all the time. That’s hard to predict but it’s something you’ve got to work on.”

The church is fortunate to have a big enough piece of property that there is a “buffer” zone between the Huts and neighboring houses. The fact that the Huts are portable also helps to ease concerns of neighbors and the congregation. “We hope our Huts stay there for a long time but it’s not as rigid as it would be if you went out there and put up a more permanent structure,” Porter says.

The Wesley Wagons committee worked with Community Supported Shelters to set up the two Huts and with St. Vincent de Paul and Heath to select their guests. Heath continues to work with them in screening potential new residents and dealing with challenging situations.

“We could not operate without St. Vincent de Paul and a person like Keith. We just couldn’t do it,” Porter says. “We wouldn’t have the knowledge or the resources that he has to bring the clients to us—to make sure that we weren’t creating any problems for the neighborhood or the church or the client.”

Heath also helps when things don’t work out with a guest. “All of us are lay people who believe in the dignity of each person, that if they can feel that they are significant and needed, they’re on their way,” Porter says. “Sometimes that doesn’t happen right away and sometimes it just doesn’t happen. Keith and St. Vinny’s are so much more skilled with situations like that.”

Things have worked out well so far for Mel Bradshaw, who moved into his Hut in June and, as the October rains hit, was making plans to move into a camper on land owned by St. Vincent de Paul. Bradshaw, 59 years old, has been on the streets since his 17-year marriage fell apart in 1999, spending most of his time “collecting cans and drinking beer.” He lived on loading docks and church porches between stints at the Mission. Now, he hasn’t had a drink in almost two years, and he has a renewed sense of hope.

“I was losing faith, getting old and feeling crippled from a failed surgery,” he says. “I thought I can’t do this anymore and then all this came into my life, and it gave me confidence to keep trying, to keep working out at the Y, to stay sober. This is kind of a blessing. People have told me along the way, ‘You get sober and things start happening,’ and it’s true.”

It’s not always easy for Bradshaw. “There are a lot of pitfalls all around,” he says. People he used to drink with on the street call him or ask to come to the Hut, seeking help he’s not in a position to give them or possibly to tempt him. One time, two drunk men took a cab to the church and were drinking in the Hut next door—neither Bradshaw or Oh were there at the time. The police were called. Bradshaw apologized to the church, but Porter and pastor Erin Martin were understanding and supportive, he says.

Bradshaw works on the flowerbeds at St. Mary’s church where he first got sober, and he has spent hours fixing up the rose beds at Wesley United Methodist Church—tending the roses, “resurrecting” a statue of St. Francis, and even washing the big windows of the church that look out on them. “I think that surprised them,” he says. “They didn’t see that coming from a homeless guy.”

“Mel goes out of this way to do things for the church,” Porter says. “James [Oh, the other current guest] helps dig trenches and does other things. They’re teaching me to be a better person, especially because of the situations that they’ve been in. I’m learning and I’m getting more out of it than they are in many ways. I feel that way—you get more out of giving indirectly than you do out of getting. And it really helps me when I see these two people. They understand the importance of giving—and that’s half the battle.”

Porter is quick to sing the praises of the Conestoga Huts, which stood up so defiantly against the driving rain. “It’s just a wonderful structure, you could almost kiss it. It’s so well thought out. It’s a wonderful stopping off point to go from one direction to another. It’s an interim thing, to give people that step up they need.”

He also says the Affordable Care Act had made a big difference for people struggling with homelessness. “Some of these people have health issues and they need to be dealt with. Now that they all have health insurance, they feel more like they are part of our country and part of our community.”

St. Vincent de Paul’s Keith Heath says reduction in funding from the city of Eugene has resulted in the reduction of two managers at the Service Station, which is no longer able to be open on weekends, and a loss of 12 spots in the parking program, which provides legal camping, free garbage disposal, and porta-potties to homeless people living in their vehicles. As a result of those cuts, he says, his program can no longer offer porta-potties and garbage service to new Hut hosting programs similar to the Wesley Wagons. (Those services continue for existing programs.)

But, he says, if a church or other organization wants to get a similar program going, he will offer the same kind of client-selection and ongoing consulting support he provides to the Methodist church. “I’ve been doing this for nine years,” Heath says, “and I’ve learned to do it with whatever resources I have available.”

Programs like the Wesley Wagons, Heath says, are “definitely doing their part” to address the problems of homelessness. They may be “baby steps,” he says, but they play a critical role in helping people who have been stamped with stereotypes of homelessness—drug addiction, alcoholism, mental illness—to feel like they deserve to be treated with dignity and respect. “Everybody wants to be noticed and respected,” he says.

Both Heath and Porter believe the 50 percent success rate of the Wesley Wagons is a good start, but both believe 100 percent is possible.

“It’s a challenge,” Porter says, with an openhearted smile. “God is challenging us.”