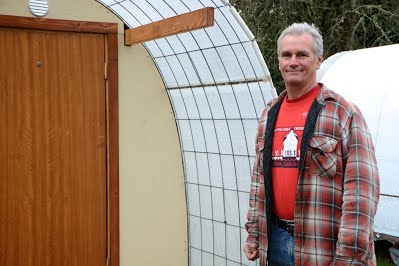 Patrick Blaine, 51, moved into a Hut next to the Wesley United Methodist Church in September after living in his van for three years. He’s saving his money to attend a trucking school.

The Hut has been a godsend. I had been living in my van for almost three years. I choose to do that. My money goes to my back account and not to rent. I’m not going to pay rent on a $10/an hour job. I have a job. I’m single. I don’t have kids. My only bills are one credit card and car insurance. I’m not paying $500 a month for rent when I bring home $1000. That’s ridiculous. Obviously if I had a family, it would be different. For me, it’s just a choice for money reasons.

Keith knows that I don’t abuse alcohol or drugs or any of that kind of stuff. A Hut became open. He knew I was living out of my car and I had been in the car camping program, so he asked if I was interested and I said, “absolutely” and then he and I went over to the Methodist Church and did the interview and they accepted me. They are giving me six months in the Hut.

I had heard about the Huts, had seen them from a distance but I had never been in one. Once I got it, I was like, “Wow, this is like a castle.” It really is. Just to be able to stand up in the morning, simple things like that, it really is a godsend. As simple as it’s built, I thought, “Wow, this could really go a long way, to help a lot of people.”

You have some place to park, some place to get out of your car and go to, so you can make that mental image of, “OK, I’m not stuck in my car at all times.” Because when I get out of the shower, I go to my car, go to work, then get back in my car. With the hut, it feels like you’re going to an apartment and that’s great.

I’ve kind of kept it like my car is because I know I have to leave. If I had it for a longer more extended time, I would do more, like my neighbor [in another Hut], a very good man. He has his totally decked out like it’s an apartment, got his full propane burner, got his computer up and running with a little RV battery. It’s cool and we laugh because he sees mine and I’m totally barebones and he’s living in luxury. I’m only there basically to sleep and get out of my car. I try to stay busy and go, go, go.

But it’s been fine in the snow and it’s rained hard enough that it’s been tested and done well. The last couple of days have been as cold as it’s been in Eugene and it was fine. It gets a little cold inside because I don’t bring any heat in, but I have a good sleeping bag, good blankets. It’s a little chilly in the morning, but it’s fine.
We have a port-a-potty provided by St. Vinny’s and also the church gave us a key to their outside bathroom if you need to shave. That’s the one and only connection to the church. They said I don’t need to come to church, “we’d love to have you but there’s no pressure to do that.” I had two interviews with the elders of the church, and they just said, “keep it simple and we’re glad to have you.” They were very kind and very welcoming. 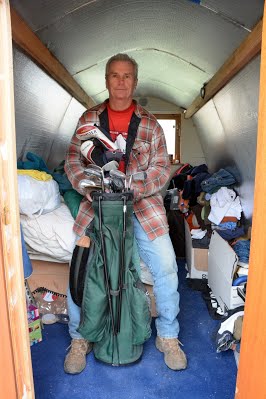 I work at Oakway Golf Course for the owner John Hammer. And I also do work for Dr. Jerry Maliner on his tree farms.

My main goal is to go to a trucking school because there is a dire need for truck drivers. There’s one school in Creswell and another one in Phoenix, where I’ve spent most of my adult life. I can drive almost any vehicle there is, so I know I can do it. I’m getting older, and I wasn’t one of those guys who put the money away. I really need to make some money in the next 15 years.

I think there is a huge possibility for the Huts because there is such a huge homeless problem. For so-called civic leaders and so-called philanthropists and the city people, they should be a no-brainer. In fact, you should build one and have them come stay a night and say “This is what we can provide.”

If more homeless people had Huts, it would just make such a difference. Then they might want to get up and go out and look for a job. It would kick them into a different mindset, of “You know, I can do something.” The Huts are no doubt the way to go. They are a little sturdier than a tent obviously. You’re up off the ground, which is key, it really is. And you’ve got a door you can lock so you can leave your stuff. You feel like you’re in your own place. What a different mindset, because you’ve got that nice little window, and you can have it open when it’s warm—and it just kind of feels like home.