“The Hut has just been a huge launching pad for me.” 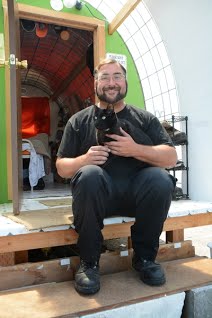 Phil Bregg, 33, lives in one of three Huts in the parking lot of the Westside Apostolic Church, next to Community Supported Shelters’ Tine Hive workshop. His Hut was the third one built and he’s been there since February. With a permanent job and a newfound sense of confidence, he will be married in mid-August and moving out of the Hut to live with his wife.
I was renting a room where I thought I could save money. I needed to start saving money to fight for my kids in a custody battle. But it turns out they were charging me more than I thought, and I just couldn’t afford it. I was working just here and there, scrapping metal, returning pop cans, doing some landscaping on a piece-by-piece basis. It was rough.

I had attended the Westside Apostolic Church for about two years, so I knew they let people stay in their parking lot. The people there made me feel comfortable enough to ask for permission to stay in the parking lot. So in October of last year, I ended up out there, living in the back of my car, a little two-door hatchback Subaru, trying to save up money.

The church parking lot is right next to the Tine Hive, where the Huts are built. Neighbors talk, and I volunteered and said I was willing to do anything. I helped put up the first two Huts and Erik [de Buhr, CSS executive director] petitioned the Opportunity Village on my behalf to see if he could build a Hut for me and got permission from the pastor, so I got the first Hut in that parking lot last February. 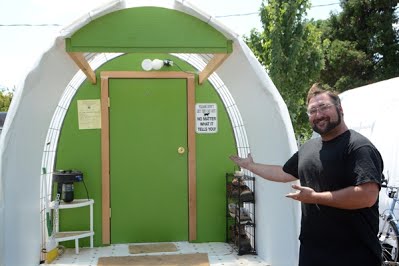 I went from my car into the Hut, so I was just ecstatic, still am. It’s really a livable accommodation. It gave me a place where I felt like I belonged. It gave me an established home, some place that I could come back to.

When you have a place you can call your own, you can store things there, you can make yourself comfortable and presentable. You can live at a higher standard, and once I started living at that higher standard it gave me confidence, and that confidence made it to where I was able to go out and start looking for better jobs. I got placed at a couple of remodels at Jo-Ann Fabric and just recently I got a permanent job with C&L Automotive.

The Hut has just been a huge launching pad for me, to get my feet under me and just go.

I’m going to be married next month. Part of the reason that I’m still staying in the Hut is that my faith doesn’t let me live with my fiancé before marriage, but when August 17 comes up, I’m going to be living with her.

It has all worked together really well for me and it was because there were people out there who were willing to open their hearts and open their minds to “You know what, this is a good guy, he’s just down on his luck.” 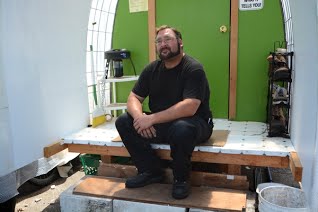 I am a success story at this point in my life and I know that what made me a success was the ability to have a place to use and improve while I needed it. Now that I don’t need it anymore, I hope it helps somebody else in the same way.

I’m going to leave whatever improvements I’ve made. I put a peep hole on the door. I painted the outside of the front. I plugged a few of the holes. I put in a shelf. I still need to paint the trim but I’m going to do that before I leave. I’m leaving behind the bed frame, a food pantry, a little table, and a hang-up mirror.

I just hope that somebody uses it for the same purpose—as a place to launch from, not just a place to settle but as a place to get their feet under them and really go, “Hey, I can start here but look at the last guy who was here, look what he did,” and move forward. Maybe it will be the blessed Hut.