“My hope is that we will become so ordinary in people’s minds, they’ll begin to see us as their neighbors” 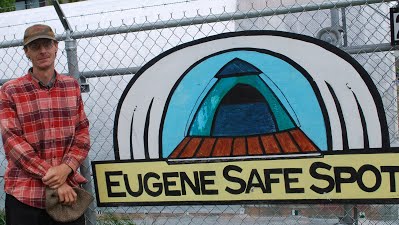 Praise, 49, is the site manager at the Eugene Safe Spot, a camp for homeless people on Roosevelt Boulevard managed by Community Supported Shelters. He moved into a Conestoga Hut at the front of the camp in early January

My role is to try and make the whole project work well. I can’t do that alone, but I try to think about the whole situation and how each person has contributed to the project in a positive way, what their strengths are. Primarily, I see my role as trying to keep morale and adherence to the rules as high as possible.

The key thing is to check in with people, to communicate, to have a relationship with people. I need to have friendships with everybody here. Even if I normally wouldn’t choose to have a cordial relationship with any particular person who lives here, I see that I have to get over that. If I don’t, there will be a conflict that will fester and grow and I can’t let that happen.

Any time you get this many people together, 19 people, you have to understand that people have quirks and different sets of standards for things like privacy and deciding when to probe into somebody’s situation. That gets a little unnerving sometimes. But each of us has to be responsible for speaking up when we don’t feel comfortable or when we feel that someone is stepping over the line. It doesn’t happen as much as it should. There aren’t many people here who do it, but the ones who do are really good at it.

It helps that everybody who was here in the beginning had a key to the gateand has continued to be a key holder. That gave us time to sort of work out the kinks in our relationships and get to know and like each other. I believe there are five other people who have and there’s a pool of 10 or 11 people who work together to watch the gate.

For the camp as a whole, we got to a stable point in early April. I don’t think anybody has been kicked out since then. Our average before that was one person getting kicked out every three weeks.

For homeless people, to be disenfranchised means that society sort of unconsciously trains you to not be very involved in the economic system. It trains you to be part of a group of people who are used as a stereotype, who are unemployed, who don’t participate in the housing market, who are not a productive tax-paying part of the economic system. That stereotype gets used as a weapon of sorts that keeps people of every other socio-economic background participating in the economic system, keeping them in line, not questioning things because they don’t want to end up like you.

But now that society is allowing some improvements in our lives, a homeless person almost inevitably has to become a little bit of an activist, at least for our own survival and some of us can’t. For some of us, our lives are being destroyed as we speak, so the main challenge in this camp for me has been and will continue to be, how can we as a group and as individuals begin to participate in the economic system in a way that makes sense for us and is going to be good enough in the eyes of the city to justify allowing this to exist.

The vision for this project is to give people the opportunity to stabilize our ability to meet our own needs—to take a shower, do laundry, etcetera—and that’s going to be an ongoing struggle for a lot of people here. Part of what needs to be put forward is the idea of developing our own support network. It’s going to take a lot of us trying to explain to people what that might look like—me and Erik [de Buhr, CSS executive director] and Fay [de Buhr, CSS fundraising director] and other people here who have some experience with that, have developed some sort of network for ourselves. That includes things like learning how to access social services, the library, food stamps, and the food bank.

There’s a spectrum between social services on the one hand, which carry the potential for dependency, and connecting with the wider community. What I see in-between is the full spectrum of things you have to develop through your own connections with people, not just social workers and people you go to church with, but with your family or friends and people you meet out in the community. Part of that also is being involved in other organizations or projects.

The volunteer work that people from this camp are doing in the community is very important, not just for building skills and connections between people in the camp, but also for the public to be educated about how much we care about them, how much we care about ourselves. That’s the sort of image that we would like to present to the public and anything that we can do to connect with the positive aspects of society, of the community around us, is good.

What I would like to see in terms of the impact this project can have on the wider society is to legitimize the existence of homeless people, as individuals and as a group, to give us an opportunity to present a human face to the world, which will help people begin to see us the way they are starting to see other people who weren’t accepted by society in the past, who were either murdered or exiled. My hope is that we will become so ordinary in people’s minds, they’ll begin to see us as their neighbors, regardless of where we live.

This is the 18th time I’ve been homeless that I know of. I’ve gotten pretty discouraged over the years having had to live outdoors so much. In particular, the location where I was before I came to this camp was physically the hardest to access that I’d ever experienced or on a par with the worst. Getting out of that situation and getting into town makes it much, much easier for me to connect to the wider community, to stay in touch with people.

I have been mildly active in what I would call the mental health system, consumer, survivor, ex-inmate movement and so I’m really trying to put forward the idea that the model that we’re trying to organize is peer support and to prevent the development of a mainstream mental health approach to things. I don’t want to be people’s counselor. They come to me when they need somebody to talk to, but I’m not the only person, everybody here talks to everybody else, and I see my role as primarily just listening.

I’m really big on taking baby steps or maybe bigger steps but just taking step-by-step approaches to things, trying things out. If something doesn’t work, you don’t just forget about it and ignore it forever, you can still keep it in your mind as a possible tool.

My role at the camp definitely made me step out of my comfort zone. It’s made me keep my own struggles in check. It’s probably the most responsibility I’ve ever had and it’s extremely time-consuming and it becomes more and more important to me to prioritize my own health. It also reminds me of my short-comings and current struggles and the areas where I’m not satisfied with how things are going. And in the back of my mind is anything that I’m not even aware of to think about yet.

At the same time, I do feel pleased that I’ve gotten some appreciation from people in just the last few days, which has helped me to relax more.