“That’s the biggest change: I can just try to get normal and do what I need to do.” 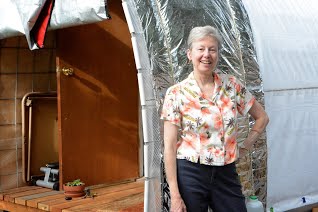 Robin Bloomgarden, 60, moved into a Hut behind a private residence in west Eugene in early June. She and the homeowner are chipping in to buy the Hut, so it can remain in that yard and be available to others in need after Bloomgarden moves out this fall. She served on the Homeless Solutions Committee that grew out of Occupy Eugene and the city’s homelessness task force. She continues to be involved in many activist causes in this area. She currently holds two part-time jobs.
I’m an apartment complex manager. I’m pretty good at it. I was doing that for years in Portland. I had my head down and I was hoping when this recession started to hit the fan that maybe they would just leave me alone, but they were corporate nasty people. They stomped in one day at 9 a.m. and said, “Sorry, but you’re fired, it’s not going to work out”—after five years. I was unemployed.

My mom was living in Arizona then and my sister was living about 100 miles away from her. My mom was not doing well. My sister and I decided, with mom’s okay, to have everyone move back to Oregon. We found an assisted living place for my mom in Eugene, and my sister moved in to one of my mom’s properties. About a month later, I moved in with her, but it didn’t work out. She kicked me out of my mom’s property. And that’s when I became homeless. And I’ve been homeless ever since. I just can’t make enough money to do anything. Every time I get a few hundred bucks together and think maybe I can find a roommate, rent a small little inexpensive place, all of a sudden, there’s a $200 bill for something. And I’m right back to square one. 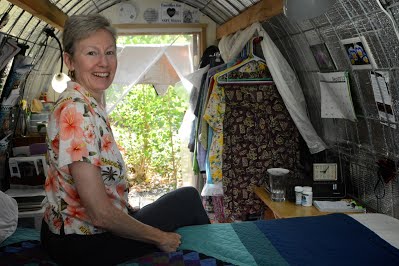 From June a year ago until I moved into the Hut, I had been surfing, staying with friends. It was a drag, mostly two to three days at a time, and I had to drag all my stuff in and out constantly. I stayed with one lady for a good part of last winter. I was supposed to be there until the end of March and I tried so hard to do everything she wanted but it was impossible, so she finally asked me to move out by the end of February—in the middle of winter. So then I hit the circuit again, sleeping on everyone’s couches and on spare bedroom floors. It’s a bitch. I have no insurance; I have nothing. I have a car, that’s what I have. So for that whole year until I moved into the Hut, I had what I could carry in my car. I was deathly afraid the whole time that someone was going to break in, ruin the car, steal the stuff. I always had to drive somewhere else to go through the back and then drive back to wherever it was that I was staying. I didn’t want people seeing that I had all that stuff. So that was like a full-time job. I hated it.
I’m a nester, and I’ve never been this close to being homeless in my life. Statistically I am homeless but I’ve been really lucky that there are so many nice people in this town who have taken me in—I haven’t had to sleep in my car once. A couple of times I thought I would, but then somebody came out of the woodwork and I had a place for a little while. 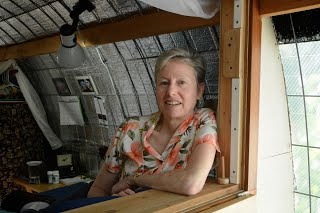 When I moved into the Hut, it was wonderful. A friend of mine came down from Portland to visit and she said, “Oh, it’s a bedroom.” And I thought, “No, it’s not a bedroom. It’s where I live. It’s where all my things are.” It’s wonderful for me to be able to lock the door and everything is in there and I can go off and do my jobs and the activism that I do around town and not have to worry about somebody stealing the stuff in the car.

I had it a lot better than people who are sleeping under bushes but all I did was move my stuff in and out of my car and people’s houses. That’s the biggest change: I can just try to get normal and do what I need to do. Started working in January, finally got a job after being unemployed for two years. Now, I have two jobs and I still don’t make enough money.

The Hut made a difference for me. I think it would really be great if other people could put them in their backyards and share houses. And I have a feeling that since it’s gone okay with me, the trick is just to find a few people willing to do it. I do things to help out the homeowner, sweep and mop the floors and help fix things around the house. I spend a lot of time in my own space so that she doesn’t feel like I’m overflowing on her. So far, so good.

I’ve been clear from the beginning that when the weather gets cold and wet and horrible, that I am not going to be in it anymore, and what the homeowner and I talked about was that maybe a homeless mom with a kid could live back there and share the house

I do housesitting and I now have a gig set up for mid-January to mid-March in a house watching some cats. Now what I’m trying to do is get some other gigs set up to do that through the winter and then hopefully maybe I’ll have enough money to get a place to live. That’s kind of the plan.