Steve “Ziggy” Lawsha moved from the Community Supported Shelters Vets Camp Safe Spot into an apartment in mid-May. His stay at the camp was relatively short but it came at a critical juncture of his life and helped him get back to being the “positive person” he’d always thought himself to be. 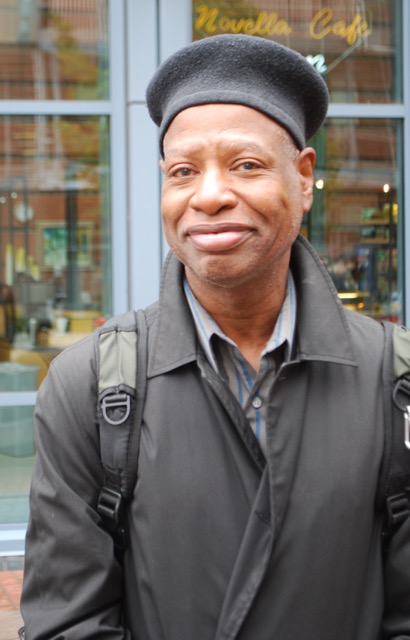 Lawsha earned a degree in journalism from Humboldt State University in 2010. He is veteran of the U.S. Air Force, serving from 1978 to 1986. He’s attending weekend classes at the University of Oregon, hoping at 59 to start a new career in teaching. He’s applied to Teach for America, a program that provides teachers for K-12 schools in low-income communities. And he became homeless in October 2013 after being evicted from a Housing and Urban Development-subsidized apartment in Humboldt County, California.

“It was really an illegal eviction,” Lawsha says. He’s still not sure exactly why he was evicted. His landlord claimed he hadn’t paid rent, but Lawsha says that’s not true and he has the receipts to prove it. He had stood up for another tenant, who was legally blind and was getting evicted. He investigated the circumstances and studied her paperwork and went to the building manager to question her eviction. The manager claimed the tenant had insulted his wife—and she was evicted. Six months later, so was Lawsha.

He tried to get help from the local legal aid service, thinking his rent receipts were a straightforward response to the charge of nonpayment. But it turned out the managing attorney at the legal aid office was on the board of directors of the subsidized housing authority, and Lawsha couldn’t get any lawyers to help. He went to the Veterans Administration for help but found there were also connections between local VA administration and the housing authority.

He tried to make it work in Humboldt for over a year, living off the Social Security Disability payments he receives because of mental health problems, trying to get his HUD subsidy reinstated and writing for The Humboldt Edge, a publication by and about the homeless (see accompanying article below).

As last winter approached, though, he came to Eugene where rents were cheaper and he could get a fresh start. “I’ve never really had a negative point-of-view,” he says, “except at the point of eviction, when I felt really down.” But even then, he says, “although I got a raw deal, I knew I had to weather it.”

He stayed at the Eugene Mission for awhile but a positive test for marijuana got him kicked out of there, at night, in the winter. He spent one night in a motel, then went to the local VA for help. A staff member there gave him a sleeping bag and some other equipment and, after talking with Erik de Buhr (Executive Director of CSS), took him to the Vets Camp, where there was a spot for him.

Lawsha says he was sick when he first got to the camp and focused on getting housing—going to the VA or the Social Security office, getting his paperwork in order—so he didn’t interact much in the camp. But when he started feeling better, he started getting to know some of the other folks. “It was more like a community,” he says. “I’d come home and the fire would be burning and we’d sit around and introduce each other. And, of course, veterans, we’ve got all these stories to tell—and we’d kid each other.”

Camp residents also helped each other in locating services and working with the various agencies that could help them secure housing, Lawsha says. One fellow camper who had lived in Eugene a long time gave him a “guided tour” of the city, helping him to feel more at home. “That was cool,” he says.

In addition to help from CSS and the Vets Camp, Lawsha credits St. Vincent de Paul and the Hope Center at the Westside Apostolic Church (a collaboration between the church, St. Vinnie’s, Food for Lane County, and other veterans support organizations.) with helping him move from homelessness to his one-bedroom apartment on Coburg Road. He got support from the HUD-VASC (Veterans Affairs Supportive Housing) program and is working part-time in a VA vocational rehabilitation program—and moving forward toward that teaching career.

He was in the Vets Camp for just over a month but it meant a lot to him.

“Without the Safe Spot,” he says, “I probably would have had to go back to California and live in the shelter because there was no other place for me to stay.”

He maintains relationships with de Buhr and some of his fellow Safe Spot residents. “I won’t forget where I came from. It was great to be there, trying to help out other guys even at the same time I needed some help, too.”

When I became homeless, there were women who once thought me eligible, who now find me undatable. Surprisingly, others who wouldn’t give me the time of day now find my present predicament exciting and sexy. However, they don’t know how to approach the subject without seemingly showing pity for my situation.

It is for those people that I developed this primer. Here are some points to consider if you would like to date someone who is homeless:

From The Humboldt Edge May/June 2014