Opportunity Village is in sight

If all goes as expected at an anticipated mid-July hearing, on-site work for Opportunity Village Eugene will begin in early August, according to Dan Bryant, pastor of First Christian Church and OVE’s chair.

OVE will be located at a site on North Garfield Street. Because the property is currently zoned for expansion of the city’s public works department, OVE must be granted a conditional use permit before the process of building the village can begin. The July public hearing will allow anyone in the community to respond to OVE’s permit application and the hearing official will decide if anything must be done to address any concerns that are raised.

“We don’t anticipate there will be any problem,” Bryant says. “The city staff has told us that the application looks good. They’re happy with it. So it’s just a matter if there is anything in the neighborhood that arises.”

Once the permit is approved, OVE can take possession of the site within two weeks. The first step is prepare the site to accommodate the plan for the village.

“Then it’s just a matter of bringing in the volunteers and the material and building,” Bryant. “We’ll probably have a couple of different days of doing some blitz building, where we get 50, 60, 70 volunteers and build a whole bunch of units in one day.”

OVE’s vetting committee has selected the first 14 residents to move onto the property, possibly using some of the Conestoga Huts built by Community Supported Shelters. Some of those people are already living in Huts, so their Huts may be moved onto the village site or new ones may be constructed. The goal is to move those people on-site as quickly as possible while building is still going on, Bryant says.

The initial residents have begun to organize themselves and elect leadership. That group will conduct the application process for additional residents, which includes background checks and interviews. The criteria is pretty basic, Bryant says, “We’re looking for people who are team players and are going to work well in a group, people who do not have any serious mental health or addiction issues, people who have the ability to do for themselves and to contribute to the overall well-being of the village.“ More than 70 applications had been received by mid-June.

The plan calls for 30 living units—10 Conestoga Huts and 20 Backyard Bungalows—for either single people or couples. Bryant says it may take a month or two to get to full capacity. 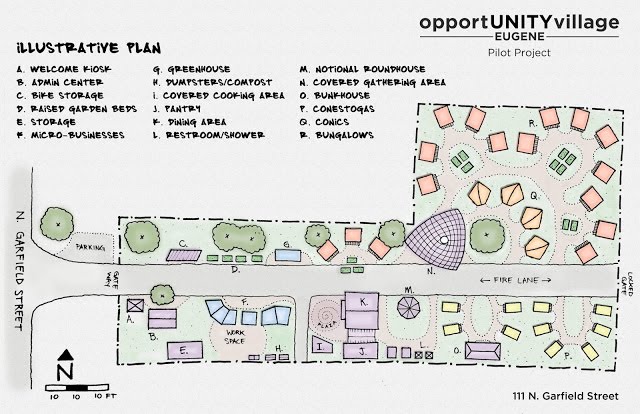 The biggest initial challenges will be bath and kitchen facilities, Bryant says. Code restrictions make a commercial kitchen unlikely, so a food cart or outdoor grills are among the alternatives being considered. In the early stages of the village, Bryant hopes churches or community groups can provide prepared food for the residents, “especially those that can say, ‘we’ll bring in a meal for 30 or 40’ to help us get going as we get everything organized.”

An even bigger challenge, Bryant says, is a bath facility. “We’d like to have hot showers, flush toilets rather than port-a-potties, but realistically, we’ll probably have to have port-a-potties initially.” Adding to the challenge is that the bath facility has to be movable because the village can only use this site for fifteen months, when the hope is that another location will become available.

Bryant estimates the sort of units OVE would like will cost from $40,000–$50,000 or up to as much as $100,000 for a unit that is “trailerable.” He hopes that the buzz created by OVE becoming a functioning village will stimulate fundraising the way the first Conestoga Huts did. “When we first started building our Conestogas, a lot of people just came out of the woodwork and just wrote us checks for anywhere from $500 to $5000, and a lot of smaller contributions, too,” he says. “Our feeling is that once we start building this, we’ll see a similar kind of thing.”

Once the village is operational, Bryant says, the next challenge is working with the individual residents to help them transition into more secure, permanent housing. “That’s a long-term programmatic thing,” he says, “putting together everything we need to give them the tools and resources that they’ll need to become self sufficient.”

There will be lots of opportunities for community volunteers to help, he says, including the early “blitz-building” days and with ongoing tasks, such as security issues, workshops and training to develop skills, help in community building, safety and first aid instructions, and mentoring residents in dealing with bureaucracies and other transitional issues. To find our more about contributing time, skills, materials, or money to Opportunity Village Eugene, click here.