Hope & Randal:Where they are now

In early fall of 2015, Hope and Randal Freeman moved from the CSS Safe Spot at Chambers and Northwest Expressway into an apartment in South Eugene, where they continue to thrive and grow. They are deeply involved with their church, Harvest Church International, where Randal is a network and media consultant, as well as being the primary driver of the church van, and Hope has been a teaching assistant and done janitorial work. After finally recovering some of Hope’s legal documents, which had been stolen during their period of homelessness, they were officially married in January. Hope has now taken Randal’s last name. They are both studying at Xplore Nations Bible College and are almost finished with the second year out of the four it will take them to get degrees. They have a 2008 Town & Country minivan that a church member sold them for $1 and the church helped them to fix up. They are enjoying cooking with an electric stove, a crockpot, a microwave, and Hope’s long hoped-for KitchenAid mixer, a wedding gift from the church. Hope’s health has greatly improved. Thanks to new medication prescribed by a neurologist they say is one of the best in the Northwest, seizures that have plagued her most of her life—including when she was in the camp—have been controlled. 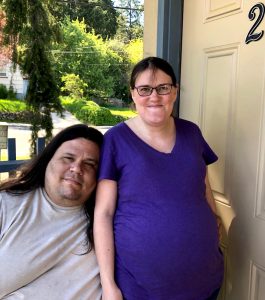 And they are expecting a daughter, Elisheba Zelda Freeman, June 16.

Hope and Randal still see counselors and get support from ShelterCare, the agency that helped them get their apartment. They look back on their time at the Safe Spot camp as stressful and uncomfortable in many ways. “We were still homeless,” Hope says. But if they hadn’t moved into the camp when they did, Randal says, they might still be homeless: “CSS gave us the time we needed to create the platform to start building our lives.” He says that the opportunity to participate as a Safe Spot camp volunteer staff member showed him that he had leadership skills that he is still developing through his education and work with the church. And they both say that they learned important interpersonal skills through the connections to other people in the camp, some of whom they are still close to.

“I wouldn’t have one-tenth of the blessings I have if it weren’t for Community Supported Shelters,” Randal says.

And Hope is very clear about what she puts at the top of any list of goals she’s made in the time since she left the camp: “Never be homeless again.”