“You’re probably literally saving some lives with this kind of housing.” 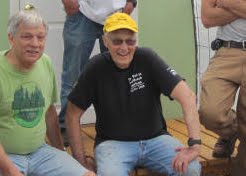 Henry “Hank” Dizney, 87, has served as a volunteer with Community Supported Shelters in several ways, including helping to erect Huts at the Wesley United Methodist Church and the Tamarack Wellness Center. A veteran of World War II and a peace activist, Dizney was a professor of educational psychology at the University of Oregon before retiring in 1993.

I saw something in the paper about the Conestoga Huts and, to be honest, I looked at it with suspicion, thought it might be something flaky. But my friend Jim Schmidt got involved and he said, “Hey we need some volunteers,” so I showed up and was doing something real simple, like moving a pile of material from point A to somewhere else. But immediately Erik [de Buhr, Community Supported Shelter’s executive director] and Fay [Carter, CSS assistant director] welcomed me—not in the formal sense, they just really make you feel welcome when you show up. They are both remarkable people.

Then the first Huts I got involved with that went from the trailer to completion were at the Wesley United Methodist Church. Well, here comes the trailer, and you think at first, man, we’re going to have to unload all that and make sense of it. But it’s put in there in the order it needs to come off in. They put a lot of thought into this.

I think the real glue for volunteers like myself is the attitude that permeates the whole project. It starts with Erik, probably, because you kind of look at him as the boss, but everybody’s got it: The other volunteers are helpful. Nobody asks you to do something you can’t do. What they do ask you to do has to be done—it’s not make-work stuff. And it’s upbeat all the way. Erik and Fay have a wonderful sense of what they are doing. They make it easy. We can’t do what they do, but we can help them do it—and that’s our role.

I don’t think there is anything that replaces that kind of hands-on tangible work: there it is, the Hut, it’s accomplished and everybody sees it. The providers see it, the people allowing space for it see it, the residents see it. How can you beat that? Often, we just write a check and send it off—cold. You don’t have that human connection.

You’re probably literally saving some lives with this kind of housing. I’ve been involved with the Egan Warming Centers a lot and know that, literally, people die from getting cold and wet. So I’m thinking these guys in the Huts are going to be dry and warm—at least warm enough to survive. Hopefully, there’ll be something outside their door that could be helpful in addition to that. Through the agency connections, the host connections, there could be some seeds for some further opportunity. But at a minimum, they’re not on the ground; they’re not getting wet. So, it’s very basic.

That design is brilliant. By keeping it simple, they’ve made it so useful. Don’t screw around with plumbing. Don’t screw around with wiring. Keep it fast. Keep it simple. The prefabbing in the shop environment further simplifies the process. What really impresses me about the design is how weather-worthy they are—that sucker will provide shelter, I think, in a hurricane.

I knew some of the people at Wesley Methodist who offered the space for the Huts. One of them is John Porter, who was planning manager for the city of Eugene for many years. In my mind, that almost completes a picture: you have to have the host, that’s essential—in fact I understand that can be a pinch point. These guys commit as a congregation to quite something when they do this.

So you’ve got the commitment from the hosts and you’ve got the people that do it like Erik and Fay and the volunteers, and then when you get involved with it, you get to meet the recipient. That’s fantastic.

By the way, my church is absolutely flunking this. They’re not going to offer any space. The neighbors would go, “ohhh, nooo.” It’s in a liberal neighborhood, but it’s all talk and no walk. And that embarrasses me. I am going to push it as far as I can.

I’m convinced that where we try to help, where we try to bootstrap, this is for us as much as it is for the guys we’re helping, and if you don’t get that, you’re only half in. I think we must learn to cease overall judgments and accept what happens. And we have to accept modest outcomes and failed outcomes. We’ve got to learn how to do that.

I love the idea that we’re working on this one Hut at a time. And within that—it’s one night at a time. Maybe we’ve got to be satisfied with keeping a guy off the ground, sometimes for one night.