Lee White is cofounder, chief executive office, and president of Northwest Media, a 28-year-old for-profit Eugene company that develops and operates international websites that serve foster, adoptive, and kinship parents with training and also serve youth at risk. The company has hosted a car camper behind its downtown Eugene building for three years. For information about the Overnight Parking Program, call 541 514 1435.

I read about the car camping program in the paper and we have this space [behind our building] with a little lawn and a paved area where we used to keep a truck. So we opened it up to car camping. 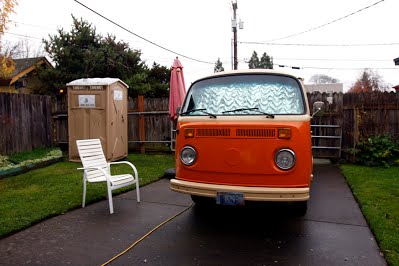 I had our office manager call and study the program and they came out and did a site visit, I believe. They introduced us to one guy who wanted to put a big mobile unit in there, and I said, “No, that’s too big, that’s not right.”And then they found a woman living in a Volkswagen van, and she was our first and only client. She’s been here around three years now.

We interviewed her and we laid down some serious rules. We’re providing a place but not a home. And I was a little hesitant about someone who would cling to our office staff and take our time but that turned out not to be the case. When we told her we wanted it private, and she said she wanted it private, too, so that’s how it been. And yet, we still use the lawn occasionally.

My feeling is it’s a mutual situation. She’s not a night watchperson, but she has helped us at times. There was one time the janitor left the backdoor of our office open to the alley—literally open—and there’s a lot of unsavory, unscrupulous characters walking down this alley at night. She called me at home and told me that it was open and I came down and shut it. That in itself was extremely valuable.

My commitment is I give her the space. I set up an electric plug outside so she can run a heater in the winter and we have wireless Internet that she connects to. And that makes her happy. But that’s all. The city provides a “porta-potty.”

Through my life I have sort of been aware of this issue and had some involvement at times. I myself was homeless when I was in college for over a year in Santa Barbara and Ventura. I lived in my car. I found that it was very difficult to find good parking places and safe ones and to use rest rooms. All that was very difficult, especially back then. That was 40 years ago. I guess I have a soft spot for people who are living in their cars.

When I lived in Santa Cruz, I was a surf bum, so I chose to live in my car. I didn’t have any money but I could always have dropped out and done some real work instead of going to college or surfing all the time. I volunteered to be on a committee in which they were talking about the problem of transient youth in Santa Cruz. And their solution was to run ’em out of town. My solution was—cause they talked about them urinating on the street and around town—to put outhouses out for them to give them a place so they don’t have to go on the street. And I think things like that are the first step, like the Service Station in Eugene where people can go take showers and get cleaned up and take care of themselves.

I don’t think that you are going to solve their problems for them. They have to solve their own problems. The people who find themselves in these circumstances have to work their way out of those circumstances but you can have tools available to them that when they make that choice they can get themselves cleaned up or they can live at the level that they want to live.

I think there are a lot of people caught in this situation who are older and don’t have enough income to rent a place. They can maintain a vehicle. She comes and goes all the time, so she can maintain her life if she doesn’t have to pay rent.

At first, I thought the situation with our car camper was transitional, and the city said these people usually stay about three months. Then it got to six months and we talked to the guy in charge of the program, and he said, “If you’re open to it, it’s fine with us to keep it going.”

I’m fine with her staying here, if it helps her stay off parking on Blair Boulevard or some weird place where she’s worried somebody is going to break a window and get her. Here, she is safe. So that’s fine.

Businesses should consider hosting car campers if they have a situation like I have, where we’ve got got some privacy, fencing, and a nice little area. I don’t know about throwing someone in your parking lot per se. And I wouldn’t go as far as to say that I would be looking at her to be my night security person. I think the idea going into this is that you’re not doing it to gain anything; you’re doing it to help a fellow human being who is maybe not as fortunate as you are.

It’s been a very positive experience for us.