The residents at the Roosevelt Safe Spot now have a kitchen, thanks in large part to the generosity and craftsmanship of Eugene Mennonite Church members and money raised from our 2017 Annual Dessert Dash. 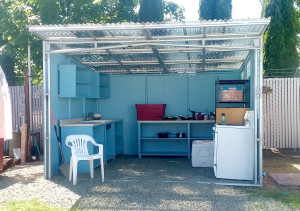 The new kitchen was constructed a few months ago at the southwest corner of the camp. The 10 by 10-foot structure is made of sturdy aluminum tubing with plywood walls and a corrugated sloped roof. The floor, made of compacted ¾-minus gravel, is level and dry.

To say the new kitchen is an upgrade to the previous “structure” would be an understatement, to put it mildly. The old kitchen was a minimalist tarp-like shelter that was cramped, leaky, and offered little storage or cooking capacity.

“We couldn’t be happier with our new kitchen,” says Donna Jackson, resident manager of the Safe Spot. “To be able to cook and clean and have things organized is a blessing.”

The new kitchen was built primarily by a crew of skilled CSS residents during a Safe Spot work party. Members of the Mennonite Church provided funding for the project, assisted in the build, and then built and installed shelving and counter space. 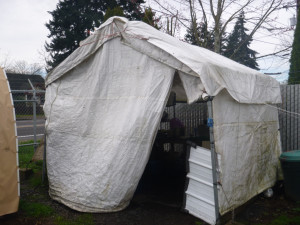 The dingy old kitchen space at the Roosevelt Safe Spot

The new kitchen has a double sink, with grey water drainage connected to a city sewer line.

“Having a sink that works like this is just amazing,” Donna says. “And having running water to cook and clean with, wash your vegetables, all of it, is such an improvement. We’re all very grateful.”

The new kitchen has resulted in residents preparing many more group meals, Donna says. Before the kitchen was built, residents were on their own for meals, which can be very isolating and not conducive to creating a sense of community. That has all changed now.

Donna says each morning starts the way it does with many households—a big pot of coffee. And then a second pot—and sometimes more.

Group dinners are coordinated by a resident kitchen manager and include spaghetti, shepherd’s pie, hamburger helper creations, and whatever meat is available from weekly deliveries from Food for Lane County.

Mennonite Church participation in the project came after several church members took a tour of the Roosevelt camp. They liked what they saw, and asked Erik de Buhr, CSS director of programs, how they could help. Erik suggested CSS could use help with funding and construction of the kitchen, and from there a plan was hatched.

The Mennonite group secured a matching grant from Everence Credit Union, a faith-based financial services organization. The funds were used to pay the cost of the structure, shelving, fixtures, and other parts of the project.

“We really like projects like this,” says Mennonite Church member Gary Harmon. “And working with everyone at Community Supported Shelters was just amazing.”

The Mennonite crew spent time at the kitchen build getting to know the residents. They came away very impressed with the residents’ resourcefulness and their ability to adapt to the challenges of daily living.

The availability of a new kitchen, especially with the rainy and cold season approaching, certainly helps residents meet those challenges.